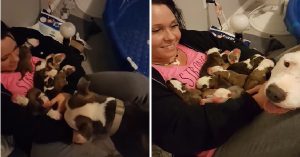 It’s not always easy gaining the trust of an animal. This is especially true if the animal hasn’t had a lot of human interaction early on in life or if they’ve had a traumatic past. It takes time to get a critter to warm up to us and have confidence that our intentions are good.

Fortunately for foster mom Stevoni Wells Doyle, she had no problem gaining trust from the pregnant, two-year-old pit bull named Graycee that she rescued from Rescue Rovers in Salt Lake City, Utah. In her 10+ years of fostering over a hundred dogs, never has she witnessed a canine that was so trusting! In fact, in a viral video, Graycee places all 11 of her newborn puppies on the lap of Stevoni, proving that she’s completely comfortable with her as her new foster mother.

In the video, Graycee carefully yet confidently placed her tiny pups onto the lap of her temporary human mom. Back and forth the mother pit bull went, picking up her little ones from a blanket in the corner of the room all the way to Stevoni.

Once her offspring were all together on Stevoni’s lap, Graycee came over to greet her babies while she received some loving pets from her favorite human.

“She laid on me and wanted me to love her too,” Stevoni said in an interview. “She would crawl on my lap and nurse my puppies if I would let her.”

While the footage was heartwarming, especially for the foster mom who has never had a foster dog simply bring over her puppies to her so early on, there were still critics in the comments. People were concerned as to why the room Stevoni, Graycee, and Graycee’s puppies were in was so bare.

A buddy of Stevoni and the non-profit has an answer. They posted the following on Reddit, explaining that empty rooms are “typically used as birthing/puppy rooms as puppies simply cannot manage their bodily functions well enough to be allowed free range of the house (unless you have all concrete floors and a high tolerance for mopping), quite aside from the safety hazards potentially present to a young puppy (or human).

The plastic swimming pool is a common solution to keeping the birthing mess manageable (when the dog is actually giving birth, they put down towels/sheets/etc to keep them comfortable). It also serves as a place for mama to go when she needs a break from the puppies.”

Once the puppies are old enough they will graduate to other areas of the home (pending potty training progress etc), and once they are old enough to be spayed/neutered and live on their own without mom around they become available for adoption.”

Stevoni certainly knows what she’s doing as a foster mom. In fact, she says she will continue to dedicate herself to fostering more canines in the future!

Watch Graycee give each of her puppies to her new foster mom below. There’s no doubt that Stevoni has earned her trust!