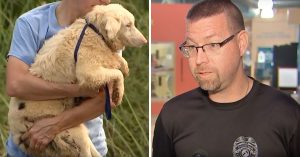 As much as we may want to just “mind our own business” and avoid any sort of drama, there comes a point where we may have to step in. That was true for a Ross Township homeowner, Damian Miller, when he continuously smelled a foul odor coming from his neighbors’ home over the course of months. But before calling the authorities, Damian gave his neighbors several chances to get the problem sorted out.

After repeatedly asking his neighbors to resolve the matter, nothing changed. That’s when animal control took charge, physically entering the home to find the source of the smell. And, unfortunately, they were mortified with what they found in the home, which was owned by Mary and Chris Frankovic.

Upon a search, not a few but 117 dogs, to be exact, were found within the neighbors’ stenchy household. The hundred-plus dogs were living in a filthy environment and were clearly uncared for, essentially living among their own bodily waste, hence why his neighbors were smelling a strange, strong odor.

And with a little more digging, it was discovered that the couple already had previous animal abuse offenses, including pet hoarding back in 2008.

Even with the Frankovic couple’s animal cruelty past, what was found within their residence was completely shocking. The animal control officers that witnessed the scene said they never came in contact with anything like it.

The couple even tried to defend their actions. According to them, they were only trying to help the dogs. But from the looks of things, their intentions were the complete opposite.

The environment wasn’t even safe for humans to enter. So, with hazmat suits and oxygen tanks, the crew rescued the dogs from the Frankovic residence. There were so many dogs within small nooks and crannies of the home that the rescuers kept thinking they had removed each dog from the premises only to enter the home again to find more. But eventually, all 117 dogs were saved.

The fire department was even called out to help clean the dirty canines once they were rescued. And thanks to the help from volunteers at local animal shelters, the starving dogs were well-fed and taken care of. As for other dogs, they were sent immediately to a veterinarian due to their poor condition. Sadly, one dog didn’t make it while a puppy who had just been born passed away shortly after birth due to malnutrition.

With so many dogs saved at once, it’s upsetting to think that not all of the dogs would be able to find forever homes. But fortunately, because the story went viral and since the situation became quite known to the Frankovics’ neighbors, many folks, including Damian Miller, reached out to adopt one of the rescued dogs.

As for those who wanted to help but couldn’t adopt, they banded together to raise $6,000 in 24 hours for an organization called Animal Friends, a charity that provides a safe space until the rescues can find forever homes.

If it weren’t for Damian’s consistent calling, nothing may have been done about the situation.

“I actually had Animal Friends tell me to quit calling,” said Damian. “There’s nothing we can do about it. Calling our township officials, same thing. We’ll look into it. Nobody would do anything about it.”

Although the story is unsettling, at least there’s a happy ending for most of the dogs, and many of them have already gone to good homes!

Discover more about this viral story below.