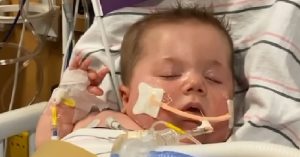 There are many reasons why people land in debt. From home mortgage, to educational expenses, to credit card debt, over a hundred million Americans owe a creditor something. Another big reason for Americans’ debt? Medical expenses. Even with insurance or another type of financial safety net, paying off medical bills can be difficult for the main reason being that hospital stays, medical testing, surgeries, medication, and the like can be costly.

A family from Evansville, Indiana, knows just how expensive paying for medical care can be. When their now-four-month-old son, Anthony Schmitz, was diagnosed with Spinal Muscular Atrophy (SMA), they were informed that this condition could potentially kill him before his second birthday. But with a newly-released, $2 million medication by the name of Zolgensma, Anthony would be able to receive a life extension. Of course, it wasn’t something the family would be able to afford right off the bat.

That’s when Anthony’s mother, Louise Johnson, made a claim with Indiana Medicaid in hopes to get financial help to receive the medication her son needed. Initially, her request was denied. The medication was just released in 2019 and had yet to go through a pre-authorization process.

After sending in a repeal, however, it was approved. So far, Indiana Medicaid has only approved Zolgensma four different times, and Anthony was one of those recipients.

Earlier this month, Anthony received his medication. His mother, who has three other sons without an SMA diagnosis, is thrilled at the opportunity for her youngest son to have a longer lifespan.

Although the family is thrilled about the good news, Anthony still has a long way to go. SMA causes limited mobility, muscle weakness, breathing problems, difficulty eating and swallowing, among other symptoms.

In fact, for most of his young life, Anthony has been hooked up to machines at Riley Hospital in Indianapolis. But being recently introduced to his life-changing medication, he may have the opportunity to live a better life without the need for frequent hospital visits.

“Not knowing when we were going to say our goodbyes or how long we would have with him. I am hoping one day he can breathe on his own without a ventilator. That is my hope for him.”

Dr. Larry Walsh is confident that the medication will work for Anthony. However, he still has the family come in every two weeks to check Anthony’s progress, specifically his respiratory function. Even if the treatment doesn’t end up being successful, Dr. Walsh is still certain that the medication is the best option for Anthony at the time.

“When he does not need to be on a ventilator, that would be a tremendous win for his family,” the doctor shared.

While things are dubious, one thing’s for sure: Anthony’s mother chose to do the right thing, and for now, she is optimistic and hopeful that things will work out as she expects.

“It a chance at life, with a better quality of life.”

Such great news for Anthony and his family! Learn more by watching the video below.