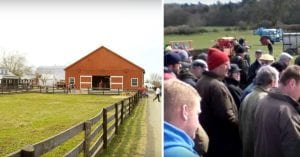 Many possessions stay within families from generation to generation: property, businesses, old watches and jewelry, handcrafted goods, and photo albums. However, sometimes there comes a point where these things stop getting passed down. Sometimes it simply stops getting passed down, or other times, it may get sold to someone else or even damaged along the way, preventing another family member from possessing it in the future.

A Nebraskan man named David knows how the latter feels. He had an 80-acre farm that had been in his family for decades, that unfortunately, was eventually given to a family member who had no interest in maintaining the land. One day in 2011, he found himself in an interesting situation when he learned his family’s farm would be up for auction. The second he found out this news, he was determined to retrieve the farmland to not only revive it but to continue to keep it within the family.

For David, this situation was now or never.

However, there was one main problem. While David knew he wanted the farm, he admits that financially, he didn’t think it was meant to be. Perhaps he also didn’t feel knowledgable enough to upkeep the land as his own. “Even though I dreamed of getting the land back for as long as I could remember when the day came, I wasn’t ready,” he says.

Regardless, two weeks later, David, along with his father, decided to head down to the auction with his best offer in mind. If his offer was the highest bid, that to him meant that getting the farm back was destiny. If not, then he’d have to move forward and hope that the farm would be taken care of by whoever possessed it next.

Upon arriving at the site of the auction, David and his father noticed approximately 200-plus farmers also present. With such a large attendance, David’s confidence in buying back the farm was at an all-time low. No way did he think he could compete with all of the other farmers. Surely, at least one of them would have a better offer.

However, to their surprise, when David raised his hand to put the first bid down on his family’s farm, absolutely no one tried to put down a bid afterward. The auctioneer continuously tried to get someone else to bid higher, but there were no takers. All of the men and women had their heads bowed as they waited in pure silence. They were determined to let David have what was always meant to be his.

“I’ve had two profoundly humbling days in my life,” David says. “The first was the day my son was born. The second was that unforgettable day at the auction house.” He will remain forever grateful for the selflessness of the other farmers present at the auction.

David is a great example of how important it is to chase your dreams, even if you think you have no shot.

What a great story! Learn more in the video below.