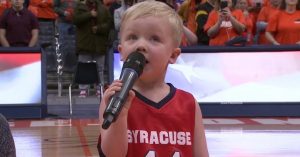 To be asked to sing the National Anthem at any stadium, big or small, is a huge honor. Everyone knows that the individuals who are usually chosen to take on this role are usually long-time singers or public figures of some sort. So, if you’re the lucky one picked to sing the “Star-Spangled Banner” before a sporting event, you bet that the people who selected you think you’re special in some form!

So, when three-year-old Drake Winslow Grillo was picked to sing in front of thousands at the Carrier Dome in Syracuse, New York, his mother, Chelsea, was shocked. Her son wasn’t a professional singer, he wasn’t a celebrity, and he was, well, a little young. But fortunately, Mom agreed to let her toddler sing on December 17, 2018, prior to the start of the Syracuse women’s basketball team’s annual School Day game against Niagara.

Singing in front of 6,000-plus people is a lot for a little guy; however, Drake was perfect for the task.

Dressed in an adorable, red Syracuse jersey, the three-year-old confidently sang into the microphone, not at all bothered by the 6,o00-plus people in the audience watching him. Not only were people impressed by his singing but simply the fact that he was just three-years-old at the time.

In fact, Drake was the youngest person in history to sing the National Anthem at the Carrier Dome, according to Syracuse University. Way to go, little guy!

And since Syracuse won that night, I guess you can say his singing helped pump up the team before their big game!

Although Drake was an awesome pick, many wonder why, out of everyone, he was the lucky ducky.

It turns out, the little fella isn’t completely new to singing and is actually quite passionate.

“Right now he’s into Christmas music, so he sings that,” Drake’s mother said. She also informed us that her son likes to carry around his toy microphone and sing around the house.

In addition, Drake sang publicly for the first time last summer at the Auburn Doubledays’ baseball games. He was just two-years-old at the time!

And from the looks of things, the toddler doesn’t seem to have stage freight, making it easy for him to perform in front of others without shame.

“I just think he’s too little to realize how big of a deal it is. We just try to stay calm for him and not really talk it up. We don’t ask him if he’s nervous.”

Chelsea is right for ensuring her sports fan, singing-loving son stays humble! One day, he will look back and realize how lucky he was to be given such an opportunity. But for now, Chelsea will keep things lowkey while still giving her son the opportunity to sing his little heart out as he wishes.

Listen to Drake’s National Anthem performance in the following video!