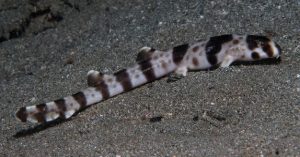 At present, there are approximately 440 discovered spark species known to man. I know that number is unsettling for a lot of people, particularly those who have a fear of sharks! But just to think that our planet is flourishing with so many of these sharp-toothed creatures is pretty incredible.

The numbers don’t just stop there. Published in the Marine and Freshwater Research journal on January 21, 2020, a team of scientists announced their discovery of four new species of sharks – walking sharks, that is! The ground-dwelling creatures were found walking along the seafloor of the Indo-Australian archipelago, bringing the known number of walking shark species from five to nine.

And no worries for those with galeophobia. It turns out, these recently-discovered species, along with other varieties of walking sharks, aren’t looking to feast off of humans.

“At less than a meter (3.2 ft) long on average, walking sharks present no threat to people, but their ability to withstand low oxygen environments and walk on their fins gives them a remarkable edge over their prey of small crustaceans and mollusks,” explained Dr. Christine Dudgeon from Australia’s University of Queensland, who led the study.

These new, gecko-like species are apart of the genus Hemiscyllium. According to researchers, these sharks evolved, so they could inhabit low oxygen-containing environments.

After conducting a DNA analysis, experts believe the walking sharks became their own species from their typical shark counterparts approximately nine million years ago. The youngest species, however, might have evolved two million years ago.

Unfortunately, it is currently unknown how many of each of these walking sharks exist. For now, scientists presume their number is fairly limited since they’ve been difficult to come by. That said, the group hopes their recent discoveries will encourage conservationists to add some of the shark species to the IUCN Red List to indicate that their kind may be threatened.

“A global recognition of the need to protect walking sharks will help ensure they thrive providing benefits for marine ecosystems and to local communities through the sharks’ value as tourism assets. It’s essential that local communities, governments and the international public continue working to establish marine protected areas to help ensure our ocean’s biodiversity continues to flourish.”

Meet the latest shark species below. They’re pretty cute if you ask me!