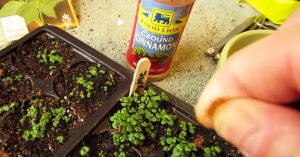 Whenever I think of cinnamon, I immediately think of sweet treats around Christmas time. But cinnamon really is an incredibly healthy spice that has more uses than just adding flavour to your favourite desserts and drinks. Yep, some of the best chili and grilled meat spice rubs that I’ve ever had contain cinnamon. And did you know that cinnamon is good for your heart health, your brain functions, and blood sugar regulation? Amazing stuff!

Have you ever heard of damping off disease? Perhaps you’ve never heard of it, but you may have seen it before… it’s a soil-borne fungus that looks like cotton and it grows on the stems of your seedlings. Infected plants might still germinate however, it’s only a matter of days before they become mushy, limp at the base, and die. Nasty stuff. But this is where cinnamon comes in…

As it turns out, cinnamon has anti-fungal properties so it’s a great solution to keeping your plants free of damping off disease. Just sprinkle the cinnamon on the soil (don’t worry if you get some on the leaves) and the wonderful spice will get to work protecting your babies. Check out the video below for all the details and don’t forget to share this amazing trick with your fellow green thumbs!