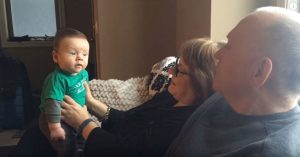 Raising a baby comes with all sorts of significant milestones. The first time the baby rolls over on their own or offers that initial adorable smile are important events for him or her, as well as for the parents and the whole family. Babies grow surprisingly quick, and each of those milestones is something to be treasured.

Every family has a different way of remembering these milestones, too. Some parents are big on pictures and albums—they will take a photo of everything big that happens; others like to write it all out in a journal, dates and times included. Then there are some who just whip out their phones and capture the moments on video—hopefully, they then upload these videos to their desktop, you know smartphones these days!

Going back to these memorable moments, most parents can probably remember them without having to refer to a photo or video—especially a baby’s first word. It seems that once a baby starts talking, they have a lot to say. But, it’s always a mystery as to what the first word will be. “Mama” and “Dada” are popular first words, and it’s normal for parents to encourage their little ones to call them directly by their name. There may even be a little bit of competition as to whose name is said first.

The doting grandparents in this video are eager to know their grandchild’s first word, and they’re hard at work encouraging him to say something. Their conversation goes something like this:

The adorable baby simply stared back, refusing to speak.

Again, he has no response. Then, Grandpa had a great idea. It came as quite a surprise, but it worked!

“I know what his first word would be.”

What? Taco? Who would ever think of that as a first word? But, to everyone’s surprise, and delight, the baby unmistakably utters the word, “taco.” Now, before you start to think that this adorable little one has an affinity for a certain tortilla-wrapped food, it also happens to be the name of the family cat. Obviously, this little boy adores his pet.

Whatever the reason, I can’t get enough of his first word as “taco,” and it had me laughing out loud. Click below to watch it for yourself!