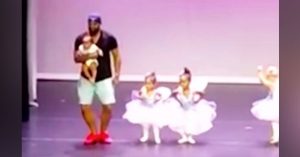 No matter what, parents are always superheroes in their kids’ eyes. Whether they find a missing sock or carry them throughout the house in a flying position, they’re the best of the best. The dad in the video down below is not short from a superhero himself, though not just to his daughter, but the thousands of people watching the video.

The clip begins with the narrator of saying, “Point, plié, and spin!” as the video shows a dad do these dance moves on stage with a baby in his arms and his 2-year-old daughter right beside him. The adorable duo dances along to “Fly to Your Heart” by Selena Gomez (Hey, don’t judge me for remembering the song I constantly heard on Disney Channel 10 years ago).

The reason that this dad, Marc Daniel, is dancing on stage with his daughter Bella, is because she had some serious stage fright at her dress rehearsal for her ballet recital.  While her fellow ballet dancers were doing the routine, she was on the floor, looking down, and refusing to dance.

The student assistant is beside the shy dancer, attempting to get Bella to dance. However, the young woman’s attempt to get Bella to stand up and start didn’t work. That’s when they called for Plan B: Dad.

Daniel runs out on stage and stands beside Bella. With the baby in one arm, he grabs Bella’s hand, and together they dance. What’s crazy is that he seems to know all of the dance moves! He dances them like a pro with his perfect posture.

As he does more of the dance moves, another recording allows us to hear the audience and other parents laughing when Daniels spins. However, you can tell that it’s not laughing in a making-fun-of-him kind of way, but in a genuine he’s-adorable kind of way.

A stagehand comes out from the left and tries to grab the baby and give Papa Daniel a rest, but Daniel shakes his head and continues to dance with both of his children.

At the end of the recital, Dad leads the dancers to the left and off of the stage, but his daughter stays there crying. Dad sneaks out again and grabs her hand before pulling her back behind the stage.

If you’d like to see this superhero dad comes to the rescue and dance alongside his daughter, watch the video down below!