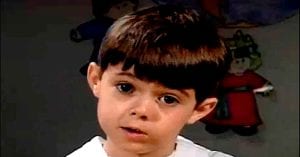 Most parents will report that grandparents tend to have a much different role in children’s lives than parents. That’s not much of a surprise, given that grandparents don’t have to be as involved in the day-to-day raising of children. They just get to spoil them and enjoy all of the fun!

According to Psychology Today, there are specific reasons why grandmas act differently than parents:

They are older and therefore, mellower in their parenting styles and position as a disciplinarian, they tend to try harder because they are not the primary caretaker in the child’s life, and they may be taking advantage of a chance for a “do-over” in their own experience of raising kids.

“But moving to the next generation, grandmothers (or grandparents in general) typically aren’t called upon to deal with their grandkids at their most challenging worst. Nor are they required to function as disciplinarians, so they can be more lenient. Having completed the arduous, worrisome, and super-responsible job of childrearing, they’re in a far better position to simply sit back and enjoy all the things that children say and do that make them so lovable…The daily stresses that go with parenting are largely absent in this quite different grandparent-to-child relationship. And so their role is less complicated, less taxing, less laborious.”

At the end of the day, kids don’t care about all this — they just like spending time with their grandparents. The little boy in this video has a very simple explanation for why God made grandmas, particularly his own grandma. In the sweetest, most genuine way, he explains that “God made grandmothers to love and care about you, that’s all I know.” He’s also very impressed with how old she is!

This little boy is lucky to have a loving, caring grandma in his life. As adults, we may think too hard about family dynamics and who plays what role in a child’s life. But, I think he has the right idea about what’s really important. I hope his grandma knows that she is loved!

Watch the adorable video below and share it with all the loving grans you know!