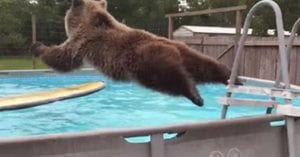 Have you ever seen a bear jump into a pool? Bear (ha!) with me here. I know it’s a strange question, but believe it or not, I have. And if you watch the video down below, you will have, too. Seriously! Let’s do a play by play on what our brown furry friend, Bruiser, was doing in his daily pool play.

Bruiser is a Syrian brown bear currently residing in the Single Vision Wildlife Sanctuary in Clay Country, Florida. He, like everyone else, was probably just as excited for summer to arrive to take a swim, so when he finally got the chance, he was going to go all out.

The video begins with Bruiser climbing up the pool ladder at a fast pace that screams, “I’m so happy!” People usually hesitate when they walk to the edge of the pool to jump in because even if it’s 90 degrees outside, and cool water may feel good, it’s still really cold! But, this doesn’t apply to this furry friend of ours! The second Bruiser reaches that last step, he jumps directly into the pool without a moment’s hesitation! He makes a big splash right before shaking his head to get rid of the water on his face.

He swims around for a bit, even taking the time to rest his paws on the surfboard in the pool, and then he goes to look at the man recording. The man asks, “Are you a happy bear this morning?”

Bruiser steps out onto the edge of the pool and jumps right back onto the ground. He shakes his body, and you can see the drops of water leaving his fur.

Then, what he does next is hilarious. He goes back to the ladder to jump in again! He’s practically a 10-year-old kid who jumps in and gets out to do it all over again (because we all know that jumping is the fun part).

He climbs really fast before diving back in, his stomach hitting the pool, and his front paws landing on the surfboard. He continues to swim, playing with the surfboard, and looks happy as ever.

One comment under the video reads, “Bruiser is just the sweetest bear ever!! I wanna hug him and play with him. Adorable!” All I can say in response to that is; same.

If you’d like to watch Bruiser the Bear diving into the pool, click the video down below! This is guaranteed to put a smile on your face.