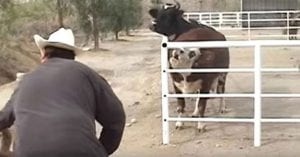 When I was younger there was this weird connection we had with my mom. That doesn’t mean that her motherly instincts don’t kick in even now, but back then we were amazed by how much she would just know without us having to open our mouths. For example, she would know the moment I walked into the door that I hadn’t eaten my lunch on a particular day. It always got me. How does she do it? I would think to myself.

We’ve always known that a mother and her children’s bond is the strongest that there will ever be. Mothers are those special people in your life that have that strong connection with you, and their motherly instincts should never be underestimated. It’s fair to say this about both humans and animals, alike.

For example, when livestock are separated from their family, especially their children, you can clearly tell how much distress these animals are really in by their reactions. Karma, a heartbroken cow, shares a similar story.

Karma was rescued by The Gentle Barn animal sanctuary, but the rescuers didn’t know that her previous owners had hidden a very big secret from them. Karma has a baby called Mr. Rojas who the sanctuary workers never knew about. The previous owners hid Mr. Rojas from them so they could sell the calf after Karma leaves. The mother cow though was torn at being separated from her baby and she was heard crying at night, while frantically searching for her child. This is when the sanctuary workers decided to do something about it. They couldn’t bear to see the mom in so much distress over her calf.

The workers went back to where Karma was rescued from and demanded that the baby is handed to them. When they finally pull up back at the sanctuary, with the trailer that was transporting Mr. Rojas, Karma knew that her baby was in the trailer. Her motherly instincts immediately kicked in. She immediately perks up and starts calling for him, and when she sees him right outside, the sound she makes will make you both happy, and sad.

Watch this beautiful reunion in the video below. And, if you enjoyed this story as much as we did, then don’t forget to share it with family and friends! Although it may bring you to tears, to begin with, the ending is heartwarming and happy.