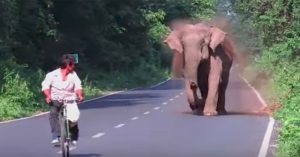 Living in the city, I’m already too frightened to ride my bike. If it’s a secluded clear path, like a trail free of traffic, then I am a happy camper. I very much enjoy bike riding for fun and as a mode of transportation. There’s something calming and meditative about the whole experience. You’re going at a speed that’s faster than walking, but slower than driving, so there’s so much more you can see and absorb but you’re also not crawling at a snail’s pace. Riding on a bike allows you to have an extra moment to smell the roses!

I’m pretty sure that’s what this man was doing on his bike ride. Everything was going as it normally does, on his daily commute, when an onlooker happened to be at the right place at the right time and caught quite the scene on his camera.

Photographer Jasoprakas Debdas caught the moment a man on his bike was being charged by a seemingly angry elephant. The video opens to the man riding his bike pretty fast in the opposite direction of the big animal. Notice how fast the elephant is running by the amount of dirt falling off and getting left behind her on the road. The cyclist speeds off, looks back and then carries on out of view of the camera.

The video stays on the elephant for a moment, as she makes her way to the side of the road. The cars and trucks at the other end are halted, at a complete standstill, unsure of what the elephant’s next move is. What the cyclist didn’t realize was that he wasn’t being aggressively chased, he was being shooed away.

The elephant is literally clearing a path for her family. They are waiting just off the shoulder of the road in the jungle for a sign that it’s safe to cross. This sweet, gentle giant just wanted to make sure no cars or cyclists got in the way of her family’s safe and sound crossing. This momma’s maternal and protector instinct is strong and loving, and she’s able to guide her family to the other side, unharmed. She meant no harm to anyone and didn’t want the humans to bring harm to her little ones. Plain and simple. And, a perfect example of how things aren’t always what they seem to be.

Click below to watch this elephant take the utmost care of her pack!