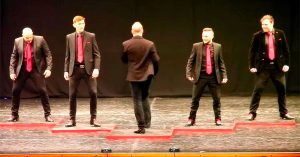 Watching any type of dance is mesmerizing. There’s so much work, practice, and passion that goes on behind the scenes in order to pull off a fabulous show. And, when you’re dancing with a partner or in a troupe, there’s so much more to take into consideration, like timing, structure, being in sync and coordinating moves that work together.

While partnered dancing is incredible, imagine having to organize a group of five and more like in Irish dancing. This kind of dancing is a whole other can of worms, and these guys sure do know how to pull it off, flawlessly.

It’s the Irish Dancing World Championships, and this group of skilled dancers is called Fusion Fighters. This professional dance crew is led by artistic director and choreographer Chris Nash who fell in love with Irish dance as a child. Honing in on his skills and advancing his career with the help of high profile companies, Chris was able to bring together this group of talent to compete. What’s so different about Fusion Fighters, as suggested in their name, is that they combine a modern skillset with the traditional form of Irish dance to create a refreshing and captivating show.

There are multiple styles interwoven to put on a spellbinding performance, unlike others who specialize in more of a time-honored style. That’s not to say their fusion is less established. In fact, their dovetailing of multiple dance styles is as incredible to watch as the work that goes behind it. As per their site, “For the past five years, they have branched away from what has become the typical Irish dance experience in order to evolve for a modern audience while still preserving their traditions.”

In this performance, they are competing in the Irish Dance World Championships, and the stakes are high. The video opens to two females occupying the stage, doing the jig. Right from the get-go, they’ve got the stage. More dancers are introduced, but it’s at the midpoint, where five gentlemen take over, that the show really takes off. It’s almost like a “dance-off” where the men are pulling fancy moves. They invite each other to bring what they’ve got to the table, and one man even gets into a handstand and uses his feet to tap while in the air! Keep your eyes on the dancers’ lower half and watch as their feet move fast and with such precision.

Click below to watch these amazing dancers bring down the house!