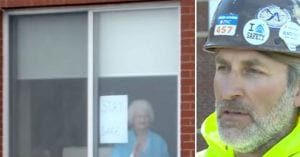 We live in a world that is quite different from what it used to be, even from 10 years ago. There was a higher sense of safety, acceptance, and kindness that did the rounds back in the day. But today things have changed. However, regardless of what is normally spread through media and news, there are many gestures of goodwill and kindness still around in society today.

When we listen to the news these days, we’re often confronted with headlines full of hate and malice, and there’s a sense of fear that comes with them. It seems like there’s nothing good left in the world. It’s at times like this that you want to hear a feel-good story that restores your faith in the human spirit.

This story of 88-year-old Gloria Porter of Connellsville, Pennsylvania, and Jeff Reick is really a wonderful example of a kind interaction between two complete strangers — at a hospital. It is sure to make you smile, just like it did for the two people who were involved.

Gloria had been admitted to the hospital and one day was just looking outside her room window watching the ironworkers hard at work, despite the poor weather conditions. She noticed that one of the guys in the group actually looked up and waved at her, so of course, she waved back. He even had a little message written on the beam for Gloria. She says, “I looked down on the beam and he had written, ‘Get well.’”

So she decided that she should also write a little message to the worker, Jeff, and thought quick before scribbling “Stay safe” on a piece of paper and displaying it in her window for him to see. This gesture struck Jeff almost immediately. “That sign kind of crushed me. I don’t know how she knew ‘Stay safe’[…]It’s kind of like ironworker lingo to stay safe.”

His entire crew of workers was touched by this message and Jeff later took to Facebook to share his experience with Gloria with everyone else. The acts of goodwill though didn’t stop there. After reading of their interaction, a complete stranger dropped off an envelope to Jeff and the crew; inside was lunch money.

It’s amazing how a small act of kindness can start a magnificent domino effect.

Click on the link below to watch the full story! Share it with family and friends and help spread the kindness!