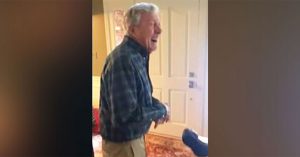 So this happens to me all the time: I always “lose” my glasses. The funny part about this incident is that almost every time I end up “finding” them, they’re either on my head or actually on my face. Yes, I still can’t put two-and-two together and figure out that the only way I see crystal clear is because of my glasses! It’s a laughing matter alright.

There’s also been this incident where I couldn’t find my favorite pair of warm fuzzy socks. I kid you not, I searched the entire house for them! I even went down to the washing machine to check if there were stuck in the crevices of the machine, but no luck. I gave up, and a couple of hours later, decided it was time to make a grocery run. I take my winter boots out to hit the snowy roads, and I feel something soft and mushy. I dig inside and lo and behold, there are my purple fuzzy socks. One in each shoe. Funny, right?

But, nothing as close as the funny situation that happens with gramps, in the video below.

You see, grandpa has been looking for his cell phone all day. It’s one of those times when you just don’t know where you put the darned thing. Even when people are calling it, there’s no luck. Well, there is SOME luck with grandpa’s phone incident because in this case, the entire family can hear the ringtone of his cell phone when they call to locate it.

The video opens up with the man admitting that he doesn’t know where his phone is. At that point, his family members are asking him if he remembers at all where he may have put it, or seen it, last. Papa says that maybe the phone was left on the counter, but someone points out something funny: when you call it, you can hear it. The ringtone goes everywhere with Papa.

This little hunt makes for a hilarious situation for the entire family. Then Gramps decides to go inside the house and figure it out for himself. This is where it all begins. The laughs come out really quickly because it’s hilarious where he finds it once he goes inside!

We won’t tell you where the phone was, so click on the link below and see it for yourself! Send this over to friends and family members to give them a good chuckle.