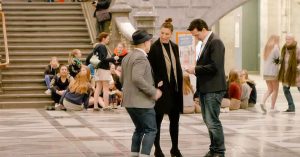 When I’m waiting for the bus, tram, streetcar, subway, or any mode of transportation, I am well aware of how deadpan my facial expression most likely is. Especially on my commute pre-coffee. I’m not terribly chatty or cheerful, and the only thing I have on my mind is caffeine and making it to where I’m going! I’m sure I’m not alone on this one. Everyone has their morning routine, mine just tends to be a little more on the grumpy side.

That being said, it’s not too difficult to jolly me out of a funk. I just need to pump the tunes or crack open a book or newspaper to get my mind turned on again. Sometimes I like to engage in conversation with a stranger or flip through my phone and delete photos (I highly recommend doing this on the downtime one has while commuting!). Then, there are the days, however, where something surprising springs up out of nowhere and no matter how engaged I am (or am not) in my surroundings, this will wake me faster than a bucket of ice water!

A well-executed, well-rehearsed flash mob is anything but cheesy. While some might think of plainclothes dancers magically emerging from the woodwork to engage in a full-on production amidst commuters in a very public place as silly, unless you know what goes on behind the scenes, it’s actually quite amazing! At the Antwerpen-Centraal train station in Denmark, where travelers and commuters are tripping around between European locations, it was this morning in particular where everyone stood still in amazement. The opening song “Grease” by Frankie Valli, from “Grease,” suddenly echoes throughout the station. A man in a hat and blazer starts the whole show by running into the center to do a fun handstand and spin around, setting the stage for the rest of the crew. The music goes on to showcase all the other big hits from the film, including, “You’re the One That I Want,” “Grease Lightning,” “We Go Together,” and way more!

Eventually, there are dozens on the floor and on the stairs leading up to the second floor, dancing in sync and together. The song’s dance-y, sing-along rhythm has everyone dancing up a storm, onlookers delighted to see the magic unfolding before them. This stunt was put on as a way to promote the theatre version of “Grease: The Musical,” and I say it’s a resounding success! No one could take their eyes off the dancers!

Click below to watch this really fun, and upbeat musical treat!