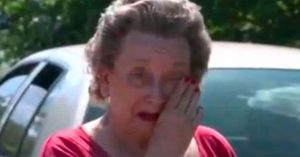 There’s something so magical when people come together to show love and kindness. In German, they even have a special word for it, “gemütlichkeit,” which is the idea of feeling warmth and friendliness from those around you. In English, we simply know it as a “community,” and it’s the notion that we should always appreciate and support our neighbors because we are all the same.

Having said that, the story you’re about to hear is filled to the brim with community love, and it’ll surely bring a sense of joy to your heart. Not to mention, it will reinvigorate your faith in the human race, that’s for sure.

A 75-year-old woman named Gerry Suttle lives in Texas, where she resides on a relatively large piece of land. But by state law, Gerry’s grass had grown too long, reaching over 18cm. Because of this, she was issued a letter, which she says she did not receive, to appear in front of a court. Of course, this left Gerry in a rather difficult situation; that’s when three young boys who lived in the neighborhood decided that they would help her out.

On a hot summer’s day, they grabbed a few lawnmowers and began mowing Gerry’s grass. They did this for no reason other than to help her out, despite never having met her. Soon, the neighbors heard of their good deed and decided to join in! The affair took a total of two hours, which left the elderly woman speechless. She wasn’t expecting this kind gesture, but when help came knocking at her door, quite literally, she was overwhelmed with emotion.

“I cannot believe this. I’m very seldom without words, but this is one time, you mark it down in history, that I didn’t have something to say,” Gerry said.

It’s wonderful to see the younger generation practicing kindness and willingly helping those in need. It says a lot about their parenting, and also reassures us that the world is in good hands. We hope to hear endless amounts of stories like this one in the future.

Hear the full story in the video below and if you’ve loved it, be sure to like and share it with your family and friends.