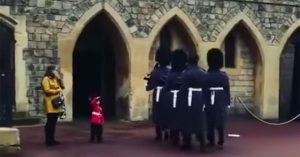 When a kid makes up his/her mind about whether or not he/she likes something, it’s a sealed deal. Kids tend to love it or hate it; there is never an in-between — they’re either all in or completely out! For example, he might hate broccoli, but he loves his Lego. She might hate dresses, but she loves her bike. It’s all or nothing with kids! And when they like something, they like it a lot! The only way I can relate is because I was always like this, and now I see my nephews being the same way!

Take 4-year-old Marshall here, from the UK. It’s his birthday, and this little boy is in for a surprise! He loves the Queen’s Guard – he’s absolutely fascinated with their job, their appearance and mystery! So much so, little Marshall was given the opportunity to dress up as one himself!

So here he is, standing at one fourth the height of the real deal, dressed up and so excited to be at the Windsor Castle, just outside of London. It’s a dream come true for him. Marshall is a mini Queen’s Guard at the Changing of the Guard Ceremony, standing near the doorway, eager and waiting in anticipation for the marching men to make their way past him.

Also known as the British Queen’s Coldstream Guards, Marshall is excited to see them drawing closer in formation, dressed in their tall hats and long navy trenches with white belts and shiny black boots. Marshall, in complete awe and adoration, gives them a salute. It is one of the cutest things you’ll watch today, I promise.

But it gets even better for the wide-eyed little boy. After they’ve marched in, one of the soldiers comes back out to stand beside the mini soldier. He hangs around for a moment, as the boy slowly approaches him. They both linger for a quick photo op. The boy salutes, the photos are snapped, the soldier has done his good deed for the day, and then promptly marches off. Surrounding folks are laughing and giggling, their hearts warmed by the little boy’s experience and the soldier’s kindness! They’re probably also surprised that the guard left the formation to make a little kid’s day better — I know I am! This is definitely a birthday to remember, and what a great gift to get!

Click below to watch this lucky little boy have a once-in-a-lifetime experience.