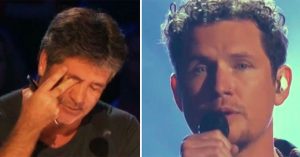 From the moment Michael Ketterer stepped onto the “America’s Got Talent” stage, earlier in the season, each judge, and America immediately resonated with him. It’s not every day you have someone step on and not only wow the world with their God-given talent, but also have a massive story. A story that is a testament to the heart and soul of this man and his wife.

You know the difference between someone who says something authentically, with heartfelt truth and from the bottom of their being, compared to someone who skims the surface and throws words at you. Michael is one forthcoming, incredible soul, and in this performance, he really brings it and touches every single person in the audience.

Michael, 41, is a pediatric nurse and performer. He revealed earlier that his beloved wife, Ivey, nearly died after giving birth to their daughter Sofia whose life nearly ended right after it started that night as well. “The doctor said the woman I loved most in life and my new daughter they probably wouldn’t make it through the night… I spent the whole night praying and miraculously, my daughter pulled through.” And, so did his wife, who, to this day, remains extremely supportive of her husband’s dreams. Since then, the couple decided to not have any more children. They adopted five boys, one who has cerebral palsy, one who was previously homeless and the other who was found in a meth lab.

For his quarter-final performance, Michael sings James Bay’s “Us” with flying colors. There’s not one dry eye in the room. From the moment he opens his mouth, his voice commands attention, but in a way that moves everyone. You can’t help but just fall into a trance, and get carried away with the raw emotion he projects through such a heavy song.

Michael’s performance is met with a standing ovation. Tyra hands the mic over to Simon, but he can’t put the words together. He’s stuttering, and blubbering, asking if he can speak next, “Come back to me. Come back… oh god. I feel like, oh Michael… look. Oh Gosh, as a dad… I kinda get… I couldn’t… I can’t imagine… what you’ve done… you’re a really special guy.” Simon is rendered speechless, in tears and in awe of Michael’s performance. Needless to say, he’s a huge fan. Even the remaining judges were at a loss for words. This is a stirring performance you might find yourself watching more than once.

Click below to see this man spill his heart on to the floor and win over everyone!