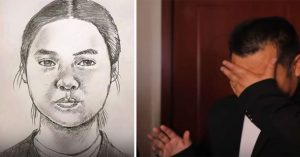 Children are capable of moving so quickly. They get distracted. See shiny things.  They can squeeze into tight places. Hide anywhere! It’s a parent’s biggest worry to look over and suddenly see their child vanish into thin air. January 8, 1994, had to be the worst day in the lives of Wang Mingqing and Liu Dengying. As roadside fruit vendors in China, the couple was just on the job on January 4, with their then 3-year-old daughter, Qifeng.

They remember that it was a busy day at the market, and Wang was in need of change to give to a customer — he didn’t have any. So, he ventured off to the neighboring stall to grab change to return to the man. All hell broke loose when he came back — his daughter wasn’t there anymore.

The desperate parents were devastated and calling out for their daughter, searching high and low, expecting to find their mischievous child playing closeby.  They scoured the area, asking people if they’d seen Qifeng, but no one knew anything about her, let alone where she could have possibly ventured off to.

This sparked years of searching. The heartbroken couple at their wit’s end trying to find their baby. They spent the next few years searching for their child but to no avail. They even went to the Children’s Welfare Home to get some answers by sorting through the missing person records. They also advertised online and in newspapers to see if anyone had any answers for them. Nothing.

In 2015, Wang became a taxi driver and figured it would be a good idea to put a “missing person” sticker on the back of his cab. Because he didn’t have a picture of Qifeng, Wang used his younger daughter’s image in place of hers, since the two had looked very similar in their childhood. He felt that maybe one day his daughter could even be one of his passengers in the taxi — you never know!

The family had no luck until very recently when a police sketch artist sketched a picture of what Qifeng could look like in her adult years. A woman named Kang Ying, about 12 miles away from the family, was surprised to see that the sketch on the Internet looked exactly like her. She eventually made her way to Wang and his family, and they had a heartfelt reunion — Kang Ying was Qifeng.

Watch the entire story unfold below.