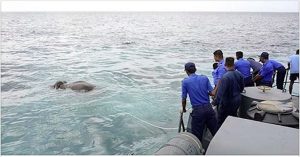 The sea, while being a place of calm and solitude, can also be exceedingly dangerous at times. This reason is why there have been many fatalities caused by tsunamis, drowning, and other natural disasters. Although people love the sea, we’re always advised to approach these water with caution, and that too for good reason.

Having said that, can you imagine being thrown into the sea without the ability to swim? Of course, this would be a frightening experience that hopefully one never has to go through; however, we can’t say that people and animals don’t get stuck in a sticky situation like that one. Take this poor elephant as an example, the scary notion became a reality for the poor guy after being swept nearly 10 miles away from shore.

The animal was spotted while Sri Lankan naval officers were doing a routine patrol, and backup was called immediately, to the rescue. The poor elephant was having a tremendously difficult time keeping its head above water, and only its trunk was visible at times, helping it to breathe. And while elephants are very good at floating in shallow water, they are nowhere near equipped to dealing with deep waters. I can’t swim and have almost drowned in the past, so I can feel for this poor animal who probably can’t think beyond possibly sinking to the ground.

Luckily, after 12 long hours and with the help of several navy officers and the department of wildlife, the frightened animal was able to be transported to safety with the use of rope and lots of strength.

The whole ordeal is one that’ll give you shivers up your spine yet make you feel extremely proud of humanity for participating in this selfless and beautiful act. For that reason, a massive bout of praise goes to the Sri Lankan Navy for stepping in and saving this majestic animal.

See the video footage below, which has been viewed over one million times on YouTube, and let us know your thoughts in the comments. If you’ve loved it, be sure to like and share this post with your lovely family and friends.