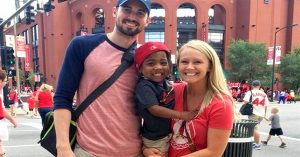 Cole and Jordan Dickerson were absolutely certain that they wanted to be parents and they also knew that adoption was part of their plan. However, they had no idea of the amazing way in which their little family would eventually take shape. Jordan works at a children’s hospital and met a little boy there, named Jeremiah, who had no family to take care of him.

She approached her husband about potentially adopting him and they began the process of becoming foster parents. However, before they could complete the process, another family began to foster him. The Dickersons were devastated, but they didn’t know yet just how wonderful things would eventually turn out. Cole continued the story on his Facebook page.

“Two weeks later, while we were on our 1-year anniversary trip, someone from Jordan’s work called and told her Jeremiah had been brought back to the hospital for medical reasons and the couple was not going to be able to continue caring for him for their own reasons. We immediately bursted into ears and knew this was the work of God that we would one day be a family.

When we got back from our trip, his social worker wanted to meet Jordan at Le Bonheur to make sure we were serious about fostering to adopt. After going through legal, medical and fostering classes, we were finally able to bring our boy home in June 2017.

Back up to April 2018, Jeremiah was praying one night. He said, “Thank you God for God, for Jesus, for my Mommy and Daddy, and my baby sister in a couple of weeks, Amen.” We looked at each other like, “What did he just say?! Not really how it works, bud.”

Just a couple of weeks later is when we surprisingly found out Jeremiah was going to be having a baby brother or sister! Fast forward to today, HE WAS RIGHT ABOUT THE BABY SISTER! We just found out yesterday!

The Miracle Worker continues to do work, and we’re so thankful to be a family.”

On the day of Jeremiah’s official adoption, Cole and Jordan were able to reveal that they were, in fact, going to add a baby girl to their growing family. They opened their hearts to a beautiful little boy and soon, their family would grow with the addition of their daughter.

Watch more about this heartwarming story in the video below!