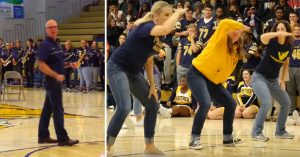 One usually associates school assemblies with boredom, but it’s also an opportunity to get time away from class (there’s a bitter-sweet factor to them right?). There’s always people talking at you, with maybe one video presentation, and a whole lot of yawning in between everything that’s happening. When an assembly is called, you know that the principal will lead the itinerary and that there is no getting out of anything that may happen in that room. You have to sit through it all.

So, these were all the thoughts that were probably coming into the students’ heads when they were attending the gathering at school on this particular day. But, it wasn’t just any old assembly. There was more to that than the students had bargained for, and their teachers had something up their sleeves that not even the principal knew about.

Move over principal, the teachers are taking over. At the Whitmer High School in Ohio, students were taken aback when their principal was escorted aside mid-speech at the rally celebrating their annual Homecoming football game.

A teacher walked onto the floor and kindly asked him to take a seat so they could put into motion their big plan.

Set to the famous and contagious “Uptown Funk” by Bruno Mars, a pack of teachers upped the ante this year, and performed a well-rehearsed, choreographed flash mob to take the crowd by surprise. It was the author and school teacher Katie Price who coordinated the show.

And it wasn’t just the teachers who showed up. This student body was in for a treat because what started off as a flash mob of five, grew to include more teachers and even a few furry mascots. They had everything in line with this one, including these special appearances. Everyone was taken by surprise and that’s a good thing!

Then a few moments into the performance, the formation changes to create two lines where mascots, teachers, and even a school resource officer walks through with some pretty funky footwork and two-stepping. Notice the one teacher who dropped down and “wormed” his way down, causing a ripple of cheering and applause!

Click below to see Katie’s creative spectacle from start to finish. It’s a pretty fun alternative to an otherwise long student assembly.