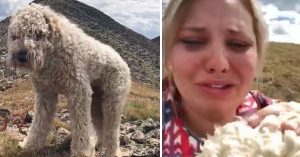 We’ve all heard it before, but that’s because it’s true – life can change in the blink of an eye. Most days, not much happens. You go through your routine, breakfast, lunch, and dinner, and then there’s that one day, that one hour or instant where something happens that drastically changes the course of your life or how you see and understand everything you thought you knew. For Samantha Orr, 21, her entire world crashed around her when she was involved in a horrific car accident with her mom, Jennifer, and one-year-old dog, Bentley.

They were cruising around the picturesque mountainside in Colorado state, USA, near Pueblo. It was an average day, Samantha said, “We were just driving along having a conversation and the next thing we knew we were going over the edge.” She lost control of the jeep and they plummeted headfirst, 600 feet down into the gorge. Jennifer was killed, and Samantha was so badly injured she had to be airlifted to the nearest hospital; Bentley was hurled out of the car upon impact, nowhere to be found.

While Samantha was sustaining her injuries in the hospital, she started a search party for her beloved pup, the only remaining member of her immediate family. She was committed to finding him and once the doctors were able to release her, she continued her search by distributing flyers and creating the Facebook group, Bring Bentley Home.

Even though she had no idea if Bentley had survived the crash, she was steadfast in her search to locate him. It was just over two weeks later when the lost pup was spotted not too far from the scene of the crash.

“This guy [Bentley] has been what can only be compared to a mountain goat for the past 19 days,” said Samantha. “After the fatal accident where I lost my mom, Bentley was last seen running downhill from the accident. For the past three days, he has been spotted far above the accident site, laying amongst the rocks along the ridge of the mountain. Peering down at the Jeep wreckage, patiently waiting for his family to return.”

With the help of strangers, Samantha was able to locate her dog and make the hour-long difficult trek to get to him. In this first video, Bentley is a little ways away, and she is trying to get him to come closer to her. He’s dazed and confused and seems to be reluctant, but with a lot of patience and soft words, Samantha is able to get him to trust her.

This second video is a follow-up. It’s a touching moment that only gets even more heartfelt after Samantha embraces her long lost pup and sends out a huge, teary-eyed thank you to every person who helped her:

Samantha later shared that Bentley is on the mend, and aside from being a little malnourished and dehydrated, he had no noticeable injuries and is thrilled to be back home, safe and sound.