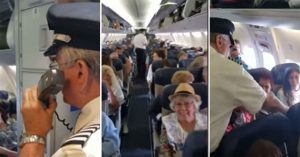 You just can’t beat a great feel-good story! One that makes you feel happy inside and appreciative of everyone that has brought something positive into your life. And today, you’re going to hear about a truly amazing story that will just do that.

It surrounds a pilot by the name of Captain John Richie, who had been working for South West Airlines for an amazing 21 years. But on this special day, his retirement, he decided to do something heartfelt for one of his passengers. As he grabbed the intercom, the flight hostess, Jennifer Todd, whipped out her phone in order to film the surprising event—and we’re lucky she did!

John began his speech by telling the passengers that today was his final flight and that he would be retiring after the plane touched ground in Pittsburgh. He then persisted to say that he wanted to give a warm thank you to everyone who was able to be on the flight and that he had a special gift for his one-millionth passenger who was on the plane.

You see, John did a little research and found out the amount that the passenger had paid for her ticket and reimbursed her with an envelope full of money. He also bought her a bottle of champagne and signed her boarding pass. He felt that this would be a great way to end a very happy and fruitful career with the airline.

After the fun was over, he moved back to the cockpit where he did his very last flight from Denver to Pittsburg—one that he (and his passengers) will not forget for a very long time!

This story has to be one of my favorites! For someone who is always afraid to fly, times like these make me think that maybe being in a plane isn’t so bad. I’ve never had a negative experience on the plane, it’s just my phobia that makes me stay away from traveling to a lot of places I want to go.

Nonetheless, I’d love to encounter a situation like this one on the plane. It would set the mood for a great flight, that’s for sure!

Has anything amazing or interesting happened to you on a flight? Let us know in the comments!

And in the meantime, watch John’s speech in the video below. If you’ve loved this beautiful story, be sure to share it with your family and friends.