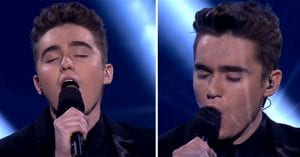 So many people defy the odds every single day. As long as you’re determined to break through stereotypes, stressful situations, and negativity, you can achieve anything you want. Harrison Craig is an excellent example of someone who has challenged every obstacle that has come his way to come out stronger.

Harrison was 19 years old when he appeared on the world-famous show, “The Voice Australia.” It was through this show that the audience, and all his fans, got to know Harrison’s long history.

He was just six years old when his father abandoned Harrison and his mother; they were both left to fend for themselves. The young man was born with a stutter, but it got worse after their father left the family. The traumatic experience left such an indelible mark on the young boy, and as a result, he was left with a speech impediment that he didn’t know how to come out of. However, he knew he had to get control over it. He didn’t know he was going to overcome it but knew he couldn’t live this way for the rest of his life. Harrison made the decision to figure it out the best way he could, and it was this growth mindset that helped him achieve his dreams.

He and his mother noticed that although he stutters when he’s talking, all his speaking inadequacies go away when he’s singing. Harrison was born with a tremendous voice, and so his mother worked with him to build his talent. Together, they found a way.

In the semi-finale show of “The Voice Australia” the singer decided he would push his vocals, and this talent, further by tackling a classic song that everyone loves. A song that is no beginner’s choice. This tune has a legacy and anyone who chooses to cover it has to know that it comes loaded with emotion. These are big shoes to fill. The He gets on stage and announces that he’s going to sing The Righteous Brothers’ “Unchained Melody.”

This decision is a big one, but it’s safe to say that Harrison did this song well and his fans and the audience were not disappointed; the judges went silent in awe. It is a performance that will be remembered for many seasons to come.

But, don’t take our word for it. Click on the link below and watch Harrison magically perform everyone’s favorite classic!