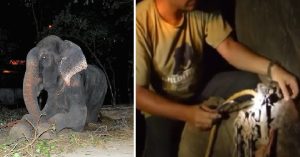 It’s hard to fathom why anyone would want to harm an innocent animal. Yet, it’s estimated that in the United States alone, approximately one million animals are abused each year. Even with animal abuse laws in all 50 states, many animal abusers fail to see that what they’re doing is wrong, even when they are confronted by authorities.

Raju the Indian elephant is one creature who has had the unfortunate experience of dealing with abuse. For five whole decades, Raju has been held captive by his owner, living a discontented life. The elephant was also physically beaten and was forced to wear tightly-wrapped spiked chains around his four legs. To make matters even worse, Raju was barely kept alive thanks to handouts from tourists. And when handouts weren’t present, he’d consumed scraps of plastic and paper to satisfy his hunger.

Having lived in such conditions for so many years, Raju was probably certain that his life would never change for the better. It was only when a non-profit conservation headquartered in India, called Wildlife SOS, one of South Asia’s largest wildlife organizations, stepped in to help.

The Wildlife SOS team came out at midnight on July 4, 2014, to confront Raju’s owner as well as rescue the endangered elephant. Immediately, the team removed the painful chains from around Raju’s lower legs. As the spiked chains were removed, Raju began to grunt in pain. I can’t imagine what the poor guy must have been feeling!

“It was so incredibly emotional for all of us. We knew in our hearts he realized he was being freed,” said Pooja Binepal, the charity’s U.K. spokeswoman.

While Raju’s rescue was difficult for everyone involved, in the video below, there’s a clip of the rescued elephant looking quite happy as he swings around some grass with his trunk.

Watch Raju the elephant get saved in the video below. It’s so sad to think that he has had such a traumatic past, but it’s so relieving seeing him get rescued!

And if you’re wondering how Raju was since a year after his rescue, you can find out by watching this next video. The elephant’s physical wounds have recovered well, and he is living a much happier life.

“The elephant who had to beg almost his entire life.. the elephant who cried.. I am so sorry that his terrible life of pain and misery couldn’t have changed sooner. Elephants are wonderful, precious, unique and highly intelligent animals, and hopefully, there will be a place for them in the future, in spite of all their enemies. If they go extinct, the sun will cry and the earth turns cold,” says one commenter.

If you wish to help Wildlife SOS rescue other India elephants in need, make sure to send them a monetary donation!