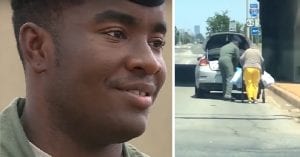 For some people, one of the hardest lessons to learn in life is to step away from their own problems for a few minutes to help someone else in need. While it might seem like common sense to assist others, some of us were essentially raised to be self-centered. Growing up, we might have been told not to talk to strangers and to mistrust people outside of our circle. While it sounds completely selfish, these are things we are taught to keep us safe, particularly during our younger years.

After all, even with our good intentions, some people may take advantage of us or even respond to our kind actions in a spiteful way. However, as we get older and gain more life experience, it’s our duty to use good judgment to determine who to help, whether it be a family friend or an unknown person on the streets, and in what scenarios to provide our assistance.

When Airman Jibril Jennings spotted an elderly woman walking in the blistering hot sun carrying groceries in Oklahoma City where he’s stationed, he sensed right away that this woman not only genuinely needed assistance but would be deserving of it. The woman, whose name is Janice Hall, was unable to purchase her own vehicle, hence why she had to walk to and from her destination to the store.

According to Janice, “I went from the post office to Walmart, then from Walmart to my bank.” From her house to Walmart alone, the distance would be two miles. On her walk back from Walmart alongside the road, that’s when Airman Jennings spotted her.

“There was a human being in the middle of the road that obviously needed help, and everyone was just driving past,” the airman explains.

So, the airman stopped his car near the intersection of Interstate 240 and Sante Fe roads to ask the woman if she needed help. He then loaded her groceries in his trunk and safely drove her back home.

Fortunately, Airman Jennings’s kind actions were not unseen. A woman by the name of Amber Roy spotted the uniformed man assisting the elderly woman while she was stopped at a red light. One of her first reactions was to whip out her phone and start recording the random act of kindness. “A soldier is helping a lady!” she said in the video.

Amber Roy wasn’t the only person who was overjoyed. Janice, too, was very appreciative of the young man’s selfless act, giving him a big hug in response. “I could tell it meant so much to her someone was helping out,” Jennings states.

Likewise, thousands of individuals on the Internet consider the airman to be a hero. However, he has a different perspective: “I don’t think this is a hero’s moment. I think this is something anybody should be able to do. If this qualifies for a hero, anybody could be a hero.”

While you might have thought Airman Jennings and Janice would cut ties shortly after the kind act, Jennings plans to keep in touch with the woman. He and his coworkers also plan on building a ramp outside of Janice’s home for her walker!

Airman Jennings is such a kind young man. Watch the footage of him assisting Janice in the video below!