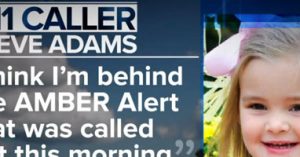 It was a chilling tale that fortunately ended with an abducted girl being rescued. Steve Adams of Murrow County, Ohio was driving when he noticed something peculiar about the car in front of him. Earlier that day, Steve heard an Amber Alert issued about a 2-year-old girl named Brooklynne who had been abducted in Knoxville, Tennessee. The car in front of him matched the description of the Amber Alert so he immediately called the police [googlead]. Listen carefully to his phone call which describes the heart-racing events that followed. Thank goodness for the Amber Alert and Steve’s quick thinking! “It’s proof the system works.” Indeed!