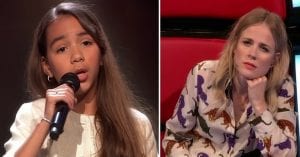 No matter how many new songs come out, there will always be those classic tunes that will always be near and dear to our hearts. Although we might be jamming out to Shawn Mendes and Beyonce today, somehow we always naturally gravitate back to those “oldies but goodies.”

Some iconic, classic songs many of us love include “Billie Jean” by Michael Jackson, “Imagine” by John Lennon, and “Sweet Child O’ Mine” by Guns n’ Roses. Whether it’s the beat, lyrics, or merely the timeliness in which these songs were released, there’s no arguing that the latter songs are some of our all-time favorites.

However, it’s pretty rare that we expect a child of this past decade or two to have an interest in the songs we, our parents or even our grandparents grew up on. With the massive selection of songs today, we’d presume they’d take a greater interest in songs of “their time.”

For 11-year-old singer, Anna Kon, she certainly stunned The Voice Kids’ audience and judges when they found out she’d be singing the 1939 song, “Over the Rainbow.” Although this is a song many of us recognize from The Wizard of Oz, for a girl of only 11 years of age to pick this oldie to sing on stage is pretty remarkable. And while there have been well over a handful of covers done on this song, little Anna’s on-stage version is simply stunning.

Dressed in white from head to toe, the singer looked heavenly on stage, just as the sound of her voice. Literally two lyrics in and Judge Marco already slams his button, giving his immediate approval for Anna. Mind you, sometimes a contestant on this show will sing halfway through the song and not have any judges turned around yet! Marco was very confident in his decision.

Seconds later, the other two judges hit their buttons as well. Looks like Anna is going to the next round! The roaring of the crowd indicates to us that they too are pleased with Anna’s vocal ability.

Watching the judges faces change throughout her performance, from dropped jaws to bugged-out eyes, it’s clear that Anna is going to be a contestant to remember. At one point, the female judge looked like she was in a complete trance!

Apart from Anna Kon’s developed voice with an impeccable range, neither too strong nor too gentle, something the singer has over others is her calm-and-collected on-stage performance. Her body language and facial expressions alone tell us that she is not only comfortable on stage, but she is in love with what she does. It’s obvious she has a successful musical career ahead of her!

Anna’s voice is truly one-of-a-kind! Hear her “Over the Rainbow” cover in the video below.