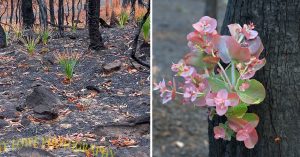 The New South Wales bushfires have been deemed one of the worst natural events in Australian history. As of January 11, 2020, at least 26 people and 25,000 koalas died from the fires. In addition, over 20 million acres of land were affected, and approximately 2,000 homes were destroyed.

Although the bushfires are still expected to continue for months, and many habitats, lives, and properties have been taken so far, there is a light at the end of the tunnel. Australians have already spotted signs of new, healthy plant growth on land that had been recently struck by fire.

Australian photographer Murray Lowe from Kulnura, New South Wales, is one witness of the new growth near the coast. In fact, he recently took beautiful photographs of lush plants growing in ashed Australian land that he later posted on Facebook.

“Ventured out into the fire grounds today to capture some images of how the Aussie bush responds to fire, and the way it regenerates itself and comes back to life. Even without any rain, life bursts through the burnt bark from the heart of the trees and the life cycle begins again,” Lowe said in the Facebook post. “It’s so heartening to see the bush coming back to life again.”

After posting his professional photos publicly on social media, they were shared over 42,000 times and commented on over 6,100 times.

“I did not, in my wildest dreams, anticipate the overwhelming response to my photos that I’ve seen. It’s both humbling and heart-warming,” he noted in an update.

The new plant growth surely is a good sign, however, numerous parts of Australia are still severely damaged and/or still burning from the series of bushfires.

According to Senior Meteorologist for Accuweather, Andy Douty, “It takes time to recover from something like this … You don’t just get one heavy rain and it’s gone,”

That said, Australia is still in dire need of help. Monetary and item donations, as well as volunteer work, are all appreciated during Australia’s time in need. You can find legitimate ways to help by referring to this source. Photographer Lowe is also selling prints of his photographs; all proceeds will go directly towards wildlife relief.

While the country and its people will take time and a lot of resources to recover, after witnessing miles of charred, damaged land, the recent plant growth is still something thousands of Australians are grateful for.

You can see pictures of the new plant growth by watching the video below. The recent growth may not be anywhere comparable to the nature the bushfires have destroyed so far, but it’s a small sign of progress that can be celebrated.