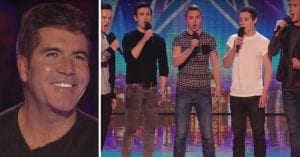 Like us, Simon Cowell and the rest of the judges on Britain’s Got Talent make presumptions about everyone they see on stage. For instance, if very meek and mild person auditions, nobody’s going to expect them to belt “Sweet Child O’ Mine” by Guns N’ Roses in a loud, raspy voice. The same concept applies to someone who’s loud and bubbly; we’re not going to expect them to put on a graceful ballet performance.

However, sometimes we’re surprised with what certain personalities are not only interested in but what they are capable of doing. For instance, many of us were stunned when teen Courtney Hadwin, such a shy and sweet girl, confidently rocked out on stage on the thirteenth season of America’s Got Talent. While both Britain’s Got Talent and America’s Got Talent judges have just about seen it all, they still get surprised by contestants every season.

For boy band, Collabro, before they even started singing, the judges were already, well, judging.

After a quick chat with the band, the judges were shocked to discover that the five young men were working in industries quite different from the music industry. Collabro comprises a laborer, a sales assistant, a kitchen salesman, a Japanese restaurant employee, and a hospital worker.

But what really surprised the judges was that they had only been singing for about a month. Immediately, Judge Simon Cowell rolls his eyes.

“What makes you think that after a month, you’re good enough to win Britain’s Got Talent?” Judge Alesha Dixon asks. According to the group, they were confident that their chemistry would be enough to get them through the competition. However, Judge Amanda Holden is clearly worried for the group as we see her bashfully hide her face with her hand. People in the audience are even covering their mouths out of fear.

That’s when the music to “Star” from Les Miserables begins. Judges David Williams and Alesha glance at one another. Neither of them expected this song choice.

As the first singer of the group starts singing solo, Amanda looks relieved, David’s jaw drops as if he’s in a trance, and Alesha smiles in delight. Most importantly, a once-grumpy Simon Cowell turns into a very impressed man! All he needed was a little convincing. As anyone knows, Simon takes every contestant’s potential with a grain of salt.

As all five men sing in unison, it’s towards the end of the song the audience roars, and the judges, including Simon, give the group a big standing ovation.

Although it’s clear that the performance was “bloody brilliant” in the words of Judge Amanda, Simon has a bit of a confession. “You know what, when the five of you came out, I thought, ‘Here we go again, another boy band. This is going to be awful,'” he admits. In the end, Simon was convinced that the quintet put on an “absolutely brilliant audition.”

With a “yes” from each of the four judges, the men felt overjoyed that their hard work in such a short period of time really did pay off – they’ve only been singing together for a month — wow!

If the judges loved Collabro, you will too! Enjoy the group’s rendition of “Stars” below.