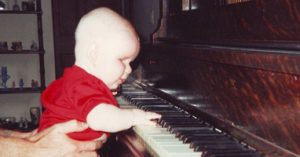 Patrick Hughes was a baby unlike most. He was born without eyes and a condition in which he could not straighten his muscles. Patrick’s father’s dreams of playing baseball with his son or going fishing were gone in the blink of an eye, however this incredible father did something amazing. When his son turned 2, he put his son in front of a piano and, almost as if it was meant to be, his son began stroking the keys as if it was a natural instinct. [googlead] His father began teaching him how to play and bonded with his son in this way. He dedicated his life to teaching his son music, discovered his son was a musical prodigy, and in the process, bonded with him. Watch this amazing story.

This story is incredible. It truly makes us appreciate what we have in life and what we take for granted. What an amazing father and son!