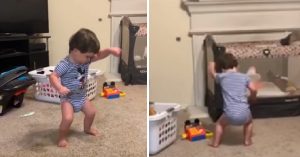 Watching a child walk for the first time is such a special moment. It’s a milestone that every parent looks forward to as it signifies the successful growth and development of their child as they leap for further independence. But every parent knows that they must be patient with the process. It takes an infant plenty of trial and error, and time, of course, to really grasp the task of walking, but once they’ve got it down, they’ll be walking around everywhere and, eventually, running to and fro.

Last summer, Momma Jolene Tahchawwickah Taylor got the experience the joys of watching her baby boy learn how to walk. But just about a week after he began stepping on his two feet independently for the first time, he decided to move onto something bigger and better: dancing!

Fortunately for us, there’s a video of the whole thing going down, and it’s definitely silly and adorable. It’s something both parents and non-parents would be thrilled to watch.

In the video, the infant, who’s wearing a striped Mickey Mouse bodysuit, is dancing on his feet to the hip-hop song, “The Git Up” sung by Blanco Brown. The upbeat tune has the little boy feeling all sorts of ways as apparent by his confident dance moves. (Who doesn’t love a fun, positive beat anyway?) Even this baby already knows good music when he hears it!

At the beginning of the clip, the brown-headed cutie bobs his body up and down with one arm out. He takes a few steps, then stops in place where he performs the same move while swaying his hips as best as a baby can. Them hips don’t lie!

In between his signature dance move, the kiddo practices his walking. But even when he talks a walking break and then gets back to dancing, he never fails to dance perfectly to the beat. He has phenomenal rhythm for his age. Not to mention, his choice in dance moves is pretty smart. I mean, I wouldn’t be surprised if he grew up to be a choreographer one day!

It looks like I’m not the only one who enjoyed the video. In the comments section of the video, people are stunned by the baby’s mature dance moves. Others express how adorable or funny they find the video. Then another chunk of folks claim they now have baby fever after watching. Can you really blame them, though?

Watch the talented bouncing baby boy’s dance performance below. He’s got moves, and he’s not afraid to show them off!