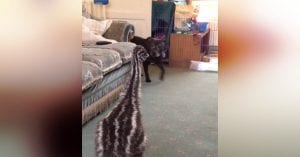 Each of our pets has its own personality, including a unique set of interests. If you’ve owned multiple pets in your lifetime, surely you know how much animals’ temperaments and mentalities can differ from one another. Some pets prefer cuddling and snoozing all day long while other pets appear to be more active, always running around the house and eager to play with toys for hours on end.

Emee the baby emu is one pet who falls under the second category. Her young age combined with her zestful personality might be a handful at times for her owner, Sue Holmes, but according to her, “Even bad days are made brighter with an emu.”

If you don’t believe Sue, you will once you watch the viral footage of Emee excitedly reacting when Molly the family dog makes an entrance! The bird’s energy will instantly rub off onto you.

In the video, we first watch as the emu chick looks around the room, looking calm and perhaps a little bored. Then to her surprise, Molly walks in, and Emee is so excited that she can’t take it!

The striped bird begins rolling on the floor in a dog-like manner before aggressively jumping up to greet her best friend. She goes from bored bird to social butterfly in a snap. She then begins dancing around on her tippy-toes like a little ballerina, running around in circles, and making high-pitched peeps to express her excitement and joy. She’s definitely a ray of sunshine, that’s for sure!

The dog at first doesn’t seem to be as excited to see Emee the way she is to see her. In fact, Molly hardly seems to acknowledge Emee. However, eventually, the two buddies start circling around the room together to express their love for one another. At one point in the clip, Sue can’t keep the two separated!

Although it’s rare to see a dog befriend a bird, or vice versa, seeing unusual duos like this is a good reminder that our differences don’t have to stop us from being kind to one another. Although Emee and Molly look very different and have different ways of life, they not only share the same home but share a bond with each other that’s strong enough to last a lifetime.

Hit that play button below to watch Emee react to Molly’s grand appearance! What’s the most unusual bond you have seen between two different species?