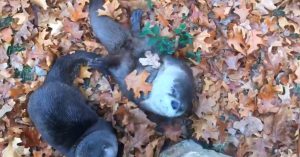 It’s autumn here in the United States and in many other countries around the world. Autumn means a lot of things, but the first thing that comes in mind is color-changing leaves that eventually fall to the ground. The warm hues of the fallen leaves are not only beautiful to look at, but the kiddos enjoy raking them into large piles to jump into or making “snow” angels out of them. It’s the perfect way to commemorate and appreciate the seasonal changes!

Apparently, children aren’t the only ones who love playing in piles of leaves. Seven rescued baby otters at the ARC for Wildlife, a rehabilitation center for wildlife in East Texas, do too. In video footage taken and posted online by the rehab center, it’s apparent that the 7- to 9-month-old otter pups are excited to celebrate their very first fall and not because it means it’s pumpkin spice season but because of the changes happening outdoors!

So, after a wind storm, the rehabilitation’s staff members let the young river otters out in the yard where they have multiple large play structures made just for them. Instead of choosing to play on those first, the critters see the leaves and decide to quickly trot through them in unison as they hear the soft crunches of the leaves underneath their tiny paws. Seeing their elongated bodies bob up and down as they trot is too cute for words!

Although the rescued pups occasionally play on the play structures in the yard as well, it’s clear that what they really love are the leaves. Apart from their adorable leaf trot, some of the otters also roll around in the leaves just like human children would do. It’s obvious that animals aren’t too much different from human beings! Like humans, these otters not only enjoy innocent play in the great outdoors, but they enjoy what Mother Nature has to offer.

The otters, whose names are Chubby, Screamer, Sweet Little Girl, Chubby Girl, Mean Little Girl, Bruce the Shark, and Slasher, were released back into the wild in the summer of 2018. However, the Internet will never forget how adorable these otters were playing in the leaves in autumn of 2017, and hopefully, the otters won’t forget this adorable moment they shared together.

These little guys and gals sure know how to live it up. Seeing these otters have so much fun makes me want to go outside and play in the leaves too!

Meet the rambunctious crew below.