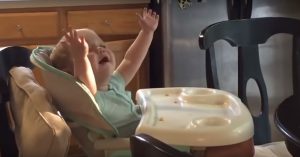 From before a child is even born to their younger elementary years, parents often sing to their little ones. Typically, nursery rhymes and soothing tunes are the primary picks. Apart from calming a child down, singing is a way parents can bond with their children and keep them entertained in the process.

As for one dad, he decided to sing an unexpected song to his infant: the national anthem of the United States, the Star Spangled Banner. While one may think the little one would prefer a more playful, upbeat tune, his response proves everyone wrong!

Dad starts the video off by singing the Star Spangled Banner in a baritone voice. His infant son sits in a high chair, probably after a little snack. Immediately, the young boy begins to show interest in the song as he gains rhythm by lightly tapping his arms on the tray in front of him. So cute!

But, along with his little “dance moves,” the sweet baby begins to sing along with daddy, “Ba, ba, ba, baaa.” While it clearly sounds like the child is trying to sing, it also seems for a minute that he’s trying to give his dad a beat to sing to.

Even when the dad begins to sing the lyrics slower, the baby adjusts his voice accordingly by doing the same: “Baaa… Baaa… Baaa…” I’m thinking that this father already has a singer on his hands! This kid can’t even speak a full sentence and already has better musical talent than I do.

But then what happens next has me losing it because the cuteness shines even more. The dad gets louder as he hits the verses, “And the rockets’ red glare, the bombs bursting in air, gave proof through the night that our flag was still there.” The baby’s singing also gets more intense as he raises his head, throws his arms halfway up, and closes his eyes to place emphasis on the strength of his focus. This is too good to be true!

As the song progresses even further, the little cutie begins to clap along with the beat. It seems like the baby is familiar with this anthem, and quite frankly, it seems like it’s one of his favorite songs. Great pick, buddy!

From his attempts of singing to his rhythmic movement to the joyous expressions on his face, this kid proves you can have a love for music, and spirit for your country, no matter what your age.

The video of the father-baby duet below will put an instant smile on your face!