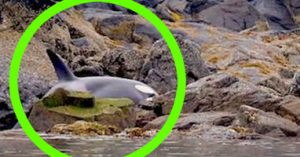 Would you know what to do if you saw a beached whale? Helping these amazing creatures can be more complicated that one might think but fortunately for one beached orca, the rescuers did exactly the right thing. The orca became stranded on a pile of rocks near Hartley Bay, British Colombia. Alone, the orca began crying for help, which caught the attention of a man who immediately called for reinforcements. Rescuers from WWF, Gitga’at Guardans, and WhalePoint came and spent over eight hours trying to help the trapped orca. [googlead]

Because of the barnacle and sharp rocks, dragging the whale back into the water was not an option. All they could do was keep the whale protected and wet until the water level rose during high tide. “Eric put together a McGaver type water pump, we grabbed as many sheets as we could, and Hermann, Bunker and Nicole, Eric and myself went to shore and approached the whale as quietly as possible.” A HUGE kudos to these amazing rescuers!