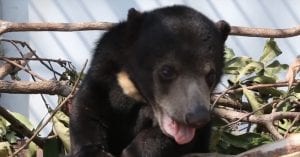 Just like us, animals aren’t immune to developing injuries, diseases, or chronic physical conditions. We’ve all heard of a bird with a broken wing, a cat with one eye, or a dog with a missing leg. Due to some animals’ setbacks, it’s up to us to provide them the temporary or permanent care and accommodations they require to live a long, happy, healthy, and safe life.

When Blue the Cambodian sun bear cub was having trouble walking due to spinal problems he developed early on in life, an Australian-based, not-for-profit organization called Free the Bears stepped in.

Initially, when Blue was rescued, volunteers at Free the Bears collected expert advice from numerous professionals throughout Cambodia. It was suggested that Blue be put to sleep if his condition worsens or if he shows signs of severe pain. However, the organization was determined to help Blue recover as much as they could.

Miraculously, in just a few months’ time, Blue was able to make great progress and didn’t display any signs of excruciating, chronic pain. In turn, Blue was not only able to climb trees on his own without assistance but was also able to walk!

While the volunteers at the organization certainly helped the baby bear get back on his feet, literally, they also give credit to another bear cub, who was also rescued around the same time as Blue, for his speedy recovery. “His rambunctious spirit meant that Blue had no choice but to constantly build up his strength,” the organization said.

Regardless of who helped and encouraged the cub the most, it’s clear that Blue was in good hands the entire time. In a video showing him post-recovery, he seems alert, happy, and quite mobile. In the end, we can thank Free the Bears for being patient with the little guy and not giving up on his healing!

According to the organization, “Free the Bears is [an] Australian not-for-profit wildlife conservation charity operating rescued bear (and other wildlife) sanctuaries across Asia, as well as initiating programs to educate about wildlife conservation, strengthen wildlife laws and enforcement, and change consumer attitudes. We’re a small grassroots charity doing big things.”

To date, the organization has rescued over 900 bears in total and currently cares for over 500, including little Blue. In fact, Blue’s story has positively affected many people online. Not only has his video earned over 214,000 views, but he’s also received plenty of kind comments expressing excitement for his triumphs. One commenter on the video says, “Tears of joy running down my cheeks!!! Amazing!!!!”

Hopefully, you were touched by his story too.

Enjoy Blue’s cuteness below! Then, be sure to check out the Free the Bears website for information on how to help other bears like Blue who are in need.