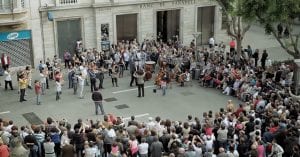 We all have our differences: personalities, traits, physical features, hobbies, the list continues. However, something just about all of us can agree with is that music, in general, is enticing. Some of us even claim we couldn’t live without it.

There’s something about watching a musical performance on stage or on the streets that’s amusing. We enjoy not only submerging ourselves into the performance itself but also admiring the unique capabilities of the musician(s) involved. The amount of incredible talent on our planet leaves us eager to listen to and appreciate the musical proficiency of other people out there.

Normally, when you think of a great musical performance, you might imagine a vigorous rock band on stage or an advanced violinist in the park. However, in one viral video, a large group of musicians teams up in flashmob fashion to put on a performance a little different from what you might expect. Let’s just say it’s going to give you 18th-century vibes—Beethoven style!

In the footage, which was filmed in May of 2012 in front of a bank in Sabadell, Spain, everyone seems to be going about their day as usual: walking, talking, and exploring the city. That is until a young boy puts money into a man’s hat, and he begins to play his cello slowly. Seconds later, another musician comes out. Both performers are a part of the Vallès Symphony Orchestra and clearly have skill. However, so far, the crowd doesn’t seem too impressed but is nevertheless providing the musicians their attention.

More and more musicians come out with different instruments. As the “Ode to Joy” orchestra performance gains excitement and grows more complex, passersby start to record the act on their phones. Even people sitting outside eating at restaurants are standing up to bring their attention to the orchestra. At one point, a little girl is climbing a light post to get a better view of the scene!

As the music booms even louder and gains plenty more momentum, people start flashing smiles, singing along, and even dancing. In the video, we even witness young children mimicking the role of a conductor.

With well over a hundred people on the streets, gathered in a circle around the musicians, it’s clear that the Beethoven flashmob was a complete success! At the end of the performance, the musicians received a steady round of applause for their job well done.

I can’t imagine how long it took them to practice!

You won’t want to miss out on this musical performance. Check it out in the video below!