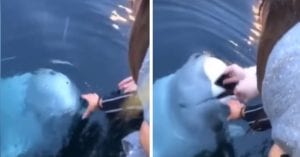 Today, a vast majority of Americans own a personal cellphone or smartphone. For those of us that do, this technological device is basically glued to us at all times. We usually always have our phones in our pocket or purse, in our hand, or on a table a foot or two away, rarely ever in a different room. But why? We want to be notified every single time someone texts us, calls us, emails us, or hits us up on social media. The second we hear that bleep, we reach for our phone.

Because we are so attached to our phones, losing or breaking it is a tragedy. Our phones contain all of our personal things like our digital photographs and videos, music, social media logins, precious e-mails, and text messages, and contacts. To top it off, fixing or replacing a phone is not financially feasible for many of us.

Just imagine the anxiety Ina Mansika got when she accidentally dropped her phone into the ocean near Hammerfest, Norway. However, luckily for her, a friendly beluga whale her and her friends found it and returned it!

In video footage of the scene, we witness a woman sifting through the water in hopes to see where the phone was dropped. Seconds later, Dodo the harness-wearing whale opens his mouth, revealing the phone.

According to Ina, “We laid down on the dock to look at it and hopefully get the chance to pat [the whale]. I had forgotten to close my jacket pocket, and my phone fell in the ocean. We assumed it would be gone forever, until the whale dove back down and came back a few moments later with my phone in its mouth!”

Although Ina’s phone no longer works, getting to witness a whale kindly returning the phone she dropped is something you don’t see every day! “Everyone was so surprised. We almost didn’t believe what we saw. I was super happy and thankful that I got my phone back,” she continues. I’m sure she was also happy to have video footage of Dodo the whale returning her phone!

I know this whole thing may sound out of the ordinary, and sometimes you need to see it to believe it. So, watch the video of the beluga whale returning the phone to the woman in the video below!