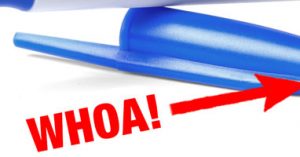 At some point in your life, you’ve probably used a Bic pen… they’re everywhere! Schools, businesses, and individuals buy these pens in bulk because they’re reliable and affordable. But who knew that these humble pens have a built-in feature that could potentially save lives? Yep, apparently Bic was smart enough to really observe how people used their pens. Obviously, people write with pens but they also sometimes develop a habit of chewing on them. [googlead]Children especially love to do this and it becomes a serious hazard because they sometimes accidentally inhale the pen caps and choke on them. So what did Bic do? They put holes in their pen caps!

This simple yet brilliant design means air can still pass through the caps should someone accidentally swallow a pen cap. The design was so successful that many other pen companies copied the design. Of course, in a choking situation, you’ll want to know how to perform the Heimlich maneuver. Below is a video from the British Red Cross on how to perform this life-saving technique… make sure you know it because it isn’t necessarily like you see it in the movies!