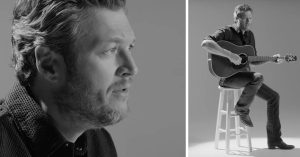 Country music is the epitome of how art imitates life. The genre is built on the human experience, showcasing the range of our emotions from heartbreak to celebration through profound (or party time) lyrics and bluesy melodies. The whole country music empire was created to pull at your heartstrings – whether you’re at a point in your life where your heart is singing or your heart is stinging, it’s this music that has become an outlet for both artists and fans to relate to each other.

Take Blake Shelton as the perfect example. The country superstar’s name is just about everywhere these days between his high profile marriage and divorce with Miranda Lambert; his re-occurring position on “The Voice”; and public affair with Gwen Stefani – he’s got a lot going on, which in turn gives him a lot to write about.

And since he has so much on his mind, consciously and subconsciously, it’s no wonder a miracle happened to him. When Blake woke up from a dream in his Oklahoma home, he knew he had to write a song about it. It’s called “Savior’s Shadow.”

In the midst of his divorce with Miranda, his dream gave him strength and peace, believing that it was God’s way of showing Blake it’s going to be ok, and realizing that he’s not alone in his dark time.

Although the song is different to Blake’s other more upbeat and party-centric tunes, he felt strongly about releasing this one, unafraid of criticism. His aim wasn’t to get a No. 1 song out of it; he says he feels like that song helped save his life.

I’m sure once you listen to the tune, you’ll know what we mean when we say that it’s definitely different from what we usually hear from the singer. But, what did you think of it? Is this song a good change to his career graph, or should he stick to his original choice of songs? You’ll have to watch it to the end to make that call.

So, have a look at Blake’s sincere music video below. It’s black and white and features Blake with nothing but a stool and a guitar crooning alongside a beautiful female voice in harmony. This is the heartfelt tune he felt like he needed to share, and hopes that it will connect with someone. It helped him heal, and maybe it will help you too.