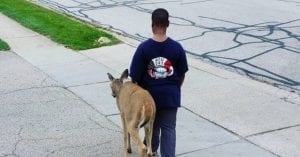 When we spot someone on the streets who looks like they’re struggling, we often feel inclined to help in any way we can. Spotting a homeless individual, we’re likely to give them some spare change or food. Watching someone carry a heavy object out of a store, we might ask if they need a lending hand. It’s generally in our nature to provide our assistance to those in need.

The same applies when we come across hurt, endangered, or homeless animals. We often try our best to care for these struggling critters as if they were our own. We may give them food, a drink of water, or take them to a local no-kill shelter with the hopes that one day they’ll get adopted into a forever home.

We typically have the instinct to help others from a very early age. This was true for an anonymous 10-year-old boy in Chicago, Illinois who helped a lost, blind deer when he spotted her wandering aimlessly around his neighborhood one day.

Each morning before school, the young boy would walk with the doe from grass patch to grass patch to ensure she not only traveled safely with her disability but was able to get enough food to eat.

Fortunately, the boy’s kind act did not go unnoticed. His neighbors, a husband and wife, saw what he was doing and decided to snap a picture of the boy and the doe from behind. The man proceeded to post the story on Reddit.

According to the man on Reddit, “My wife and I took this photo yesterday after seeing this happen for a few days. My wife called the local wildlife rescue group a few towns over. They have a vet on staff and will be picking the animal up today to bring her a forest preserve where she can be looked after and stay out of traffic. I hope she does OK because she was so docile.”

Living in a forest preserve, the doe will have a safer environment to thrive in with as natural of a habitat as possible, but for the time being, the help from the young boy was incredibly touching!

“His concern was very mature. He had only been walking the deer for a few days and hadn’t named her or tried to claim her as a pet or anything like that. Neither did he shelter her indoors or leave food outside for her which is against the law in our state. He just wanted her to be OK and was relieved to know she would be safe.”

Although other neighbors have pitched in to help the frazzled doe, the man admits that the 10-year-old’s actions were by far the most endearing: “When they took her away I spoke to some more people and it sounds like the rest of the neighborhood has been feeding her and guiding her away the road for almost a week now. The little boy was by far the sweetest example of helping and caring.”

Because of the boy’s generosity, his two neighbors decided to talk to his mom to work out a way to reward him. The couple initially came up with two ideas: give the boy the framed photo they took of him with the deer and take him to the local wildlife preserve whenever he wishes. What sweet ways to give back!

Learn more about the Chicago boy’s selfless act in the video below. Our world needs more people like him!