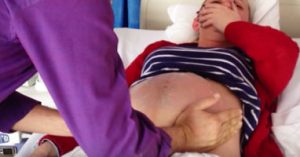 Although most pregnancies do result in healthy babies, the reality is that complications can and do happen and that’s why it’s important that expecting mothers visit their doctors regularly. Many complications can arise if a baby is breech at full term. What does this mean? Normally, babies are in a head-down position in the mother’s uterus. But a breech baby is a baby who is in the bottom-down, or feet-first, position.

If a baby is breech, the baby is at serious risk of complications during traditional birth. Consequently, doctors typically recommend that breech babies are delivered by cesarean (C-section). Of course, cesarean delivery has its own set of risks so the ideal scenario is the doctor turning the baby while it’s still in the mother’s uterus. As you might imagine, it’s a lot more difficult than it sounds.

When Jess Muckleston went to the Royal Sussex Hospital in Brighton, she was 36 weeks pregnant with a breech baby. The doctor had decided to perform the procedures known as external cephalic version (ECV), hoping to turn the baby. He warned Jess that the procedure would be uncomfortable. “If you cannot tolerate it, just say so.”

The doctor begins by massaging Jess’ belly, and then he physically tries to turn the baby into the correct position. After about two minutes, the doctor uses the ultrasound to check on the baby, and the results are nothing short of amazing.

Watch this breathtaking video below and let us know what you think. Have you ever seen anything like this before? This video is going absolutely viral with nearly 2 million views as of the time of this writing!