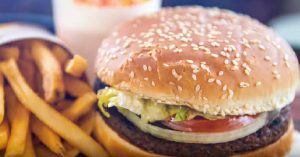 I know what some of you are thinking right now: Valentine’s Day is near. Some of you are thrilled to go out on a nice dinner date with your sweetie and receive a box of delectable chocolates. Then there are others of you who are dreading the mushy gushy day of love. But if you’ve recently gone through a nasty breakup or haven’t had a Valentine in a while, no worries. There are millions of Americans who are also on the same boat.

And this year, Burger King wants to give a special treat to those who are anti-Valentine’s Day: one of their Whopper burgers! What’s the catch? Well, all you have to do is bring in a printed photograph of your ex-lover. In exchange for giving up a piece of your past (that you’ll never want back), you’ll get a delicious bite to eat, free of charge.

“This Valentine’s Day, who needs The Joker when you can have the King? In a new partnership with Warner Bros. Pictures and their new film ‘Birds of Prey (And the Fantabulous Emancipation of One Harley Quinn),’ Burger King restaurants are celebrating Anti-Valentine’s Day in true Harley Quinn fashion,” the company said in a press release.

I can hear millions of people rejoicing!

But what does the burger joint do after you give them a photo of your ex? They’ll destroy it on your behalf. Now that’s what I’m talking about.

As for New Yorkers, they’ll be allowed to bring in other objects tied to their ex: old love letters, a teddy bear, a piece of jewelry, or anything else that reminds them of a previous lover. By giving a once-cherished object from an ex to the fast-food restaurant, it will lift a heavy weight off of broken-hearted people’s shoulders.

Sadly, the offer will only be available in four major U.S. cities: New York City, San Francisco, Boston, and Los Angeles. Fortunately, that still gives millions of Americans the opportunity to get the free Anti-Valentine’s Day sandwich. Maybe in the future if they do the promo again, they’ll extend the offer elsewhere. *fingers crossed*

But for those not residing in one of those four cities, they can soon enjoy a $3 Whopper if they answer four out of five questions correctly on a quiz coming soon on the Burger King app. You also have the opportunity to receive other exclusive coupons when downloading the app on your smartphone or other compatible mobile device.

Watch below to find out more about Burger King’s promo this Valentine’s Day.