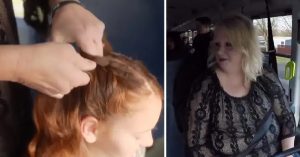 Losing a parent is hard enough. Losing a parent at a young age due to an unexpected diagnosis is even harder. Isabella Pieri knows that reality. She lost her mother to cancer when she was just nine-years-old. Since her mother’s passing, she was forced to grow up a little quicker and become more independent when it came to taking care of herself. But there was one thing she still struggled with: Styling her own hair.

As much as he could, Isabella’s father tried to help. With failed attempts, the father felt that it would be best to have his daughter’s lengthy hair chopped into a crewcut-styled ‘do, to which Isabella agreed. Unfortunately, Isabella ended up not liking her new hair, so over the years, she patiently grew it back out only to face the same struggles once again.

Then one day, Isabella saw her school bus driver, Tracy Dean, styling one of her peer’s hair. Wanting help with her own hair, Isabella asked the driver if she could do her hair too. Tracy agreed, asking if she could stay for about 10 minutes on the bus once they arrived at the school.

The young girl was overjoyed with the beautiful braid that Bus Driver Tracy gave her. She never felt so beautiful in her life, and while hair is just one part of us, having nice hair meant everything to her.

Isabella then learned something shocking about her bus driver who was now crying: She, like her mother, had cancer. While Tracy is a survivor, it broke her heart that Isabella’s mother wasn’t. But since the bus driver went through remission, she made it a goal of hers to always be there for the children on her bus.

“I didn’t just survive for my husband or my children. I survived for these kids on the bus that need somebody to talk to or do their hair or whatever,” the bus driver said.

There was a point in time that Tracy thought she wouldn’t be able to be there for her own children. Now that she’s no longer sick, she takes pride in acting as a mother figure for other kids.

“It makes me feel like she’s a mom pretty much to me, and it makes me really excited for the next day to see what she does,” said Isabella.

Tracy is the type of bus driver our world needs more of! She’s an angel. Meet Isabella and Bus Driver Tracy below.