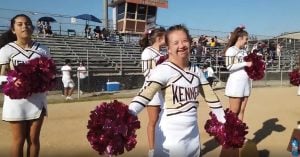 Approximately 6,000 babies are born with Down syndrome every year in the United States. From deficient muscle tone to cognitive delays, those with Down syndrome have unique setbacks compared to those without the diagnosis. At this time, there are no known cures or preventative methods for Down syndrome, only treatment options such as speech therapy, special education, and occupational therapy.

But fortunately, according to the National Down Syndrome Society, “Individuals with Down syndrome are becoming increasingly integrated into society and community organizations, such as school, health care systems, workforces, and social and recreational activities.” 14-year-old cheerleader, Bella Martinez, is a perfect example of that.

Bella, who was diagnosed with Down syndrome, may have some differences from her peers at John F. Kennedy High School in Los Angeles, CA. However, there’s something her diagnosis won’t prevent her from doing: being your average teenager. From talking to boys (Hawaiian boys are her favorite) to joining her high school’s cheerleading squad, the teen is living her life to the fullest – and on her own terms!

Not only is Bella an excellent addition to the team, but she loves to incorporate her own unique spin into the extracurricular activity.

“She’s like the one that encourages the boys on the sideline. She does like her own little chants, and that’s fun to see because she has her personality, and it comes from her and within,” Ortiz continued.

Although Bella is doing great today, her mother, Yuri Martinez, was initially concerned when she found out about her daughter’s diagnosis but was still determined to remain a supportive, loving parent.

“I thought, she won’t go to prom. She won’t, you know, do your typical teenage stuff, and here we are; she’s doing cheer!”

Yuri has some great advice for other parents out there who have a child diagnosed with Down syndrome:

And thanks to her encouraging, optimistic upbringing, Bella has had the opportunity to thrive in the best ways possible, including becoming a great cheerleader!

Learn more about Bella by clicking the video below.