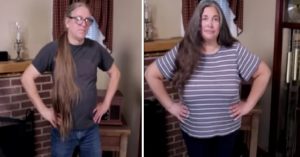 The younger we are, the more rapidly we change as we figure out who we are. The further we settle into adulthood, however, the more we tend to stick to our usual routines as we have had time to figure out our preferences. The way we groom ourselves and dress are two things that stay fairly static once we hit a certain age.

Although we may be content with how we present ourselves, there comes a point where we might grow tired of our same everyday appearance. For Charles and Michelle, a middle-aged couple from Wanaque, New Jersey, they began to feel that way about themselves. As an ex-rockstar, Charles hadn’t had his haircut in a decade while his wife, whose hair was presumably trimmed by herself at home over the years, hasn’t had a professional cut in a little over two decades. With overgrown locks, the couple decided, along with the approval of their 17-year-old daughter, that now was the time for a fresh, new look!

Not only did the couple want a new hairdo, but Michelle had another suggestion for the makeover: “Maybe we’d look quite a bit younger if we didn’t have any gray in our hair.” “58 and 50 isn’t very old. That’s like, what, the new 30 and 40?” she continues. Because she still felt like a fun, young mom on the inside, Michelle felt that her outer appearance didn’t represent her properly.

Michelle’s husband, too, wanted more than just a haircut. Now working with several people at the corporate level at his place of work, Charles was hoping by opting for the makeover that he’d be given some wardrobe suggestions to amp up his usual comfy-casual attire.

Luckily for the New Jersey couple, they got paired up with Australian hairstylist, television star, and salon owner, Tabatha Coffey.

First things first: Charles’s long hair needed to be cut. The experienced hairstylist divided his locks into four separate ponytails before cutting his hair because she couldn’t get her shears through! Television Host, Rachael Ray, got the honor of cutting off each pony. Charles will end up donating his hair to Locks of Love, which he has done previously.

The rest of both Charles and Michelle’s makeovers were done behind closed doors, but as the couple walked out on stage, they look absolutely nothing like they did before! Michelle the lunch lady came out with a short, brown, curly ‘do and comfy yet feminine clothing while her hubby received an uber-trendy haircut paired with age-appropriate “rockstar” clothing.

“They look fabulous! Oh my God,” their daughter replied while in tears. Their daughter had never seen her father with short hair before!

Michelle and Charles also agreed that their new makeover was “awesome!”

Check out the couple’s incredible makeovers below. You won’t even recognize them!